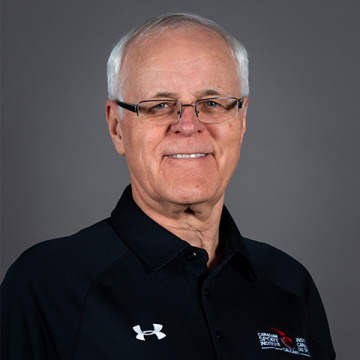 Dale Henwood devoted his life to sport development, the pursuit of excellence in Alberta, and to making sport in Canada better. Dale is a former hockey coach, having worked with collegiate and high-performance players in the USA and Canada. He was on the coaching staff of the 1984, 1988 and 1992 men’s Olympic hockey teams. He has worked with Hockey Alberta, Alberta Sport Council and in 1994 became the first President and CEO of the Canadian Sport Institute Calgary.

Having a place that provides athletes and their coaches with all the support they need to perform their best has always been a dream for Dale. And for the last twenty-five years, he has had the opportunity to work with a team of committed, passionate and caring experts to help keep this dream alive. In 2013, Dale was also named President of the Association of Sport Performance Centre. The Association has over 80 members from around the world.

Dale also promotes and advocates the benefits of physical activity and sport, writing and speaking to our politicians for the need for greater government commitment and involvement. He works tirelessly to speak up and advocate for the value that sport, and healthy lifestyle brings to our youth. When Dale is not working, he is very involved in serving the community through his church, the drop-in centre, Samaritans Purse and with several local or international sport organizations.

Dale in the news Statement Regarding the Responsible Coaching Movement and Abuse in Sport

Statement Regarding the Responsible Coaching Movement and Abuse in Sport The Right Thing To Do

The impact that a coach can have on an athlete…

The Right Thing To Do High performance athletes are known for their intense focus and… Bo Levi Mitchell is no stranger to fast-paced high-risk sport,… (Arianne Jones, Luge) In a world where we have never…